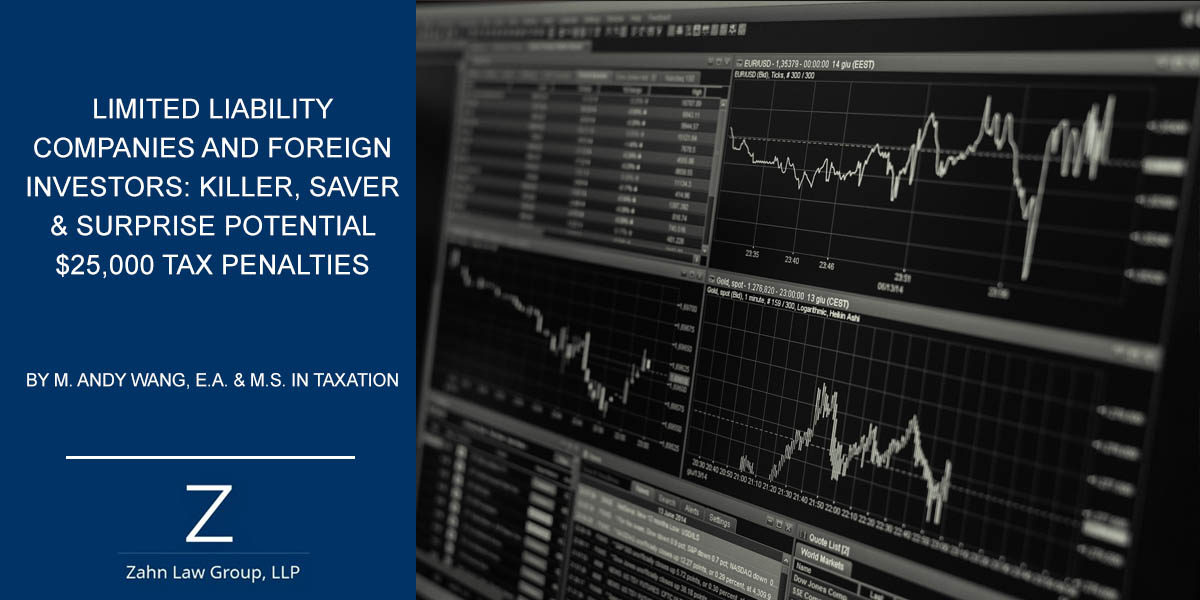 Historically, when foreign investors consider entering the U.S. market, they usually tend to follow the advice of local counsel in their home jurisdiction or a U.S. corporate attorney who suggests that they launch their U.S. business operations by setting up a U.S. Limited Liability Company ("LLC"). However, too often, before setting up a U.S. LLC, they fail to obtain proper advice from a seasoned international tax accountant and/or tax attorney to guide them as to the potential negative tax implications of operating a U.S. business through a wholly-owned U.S LLC that is treated as a âdisregarded entityâ (defined below) or a multi-member owned LLC that is treated as a pass-through partnership for U.S. federal income tax purposes. Admittedly, forming a U.S. LLC may be the easiest entity to set up when starting a new U.S. business endeavor, especially as this structure has many benefits, such as low initial formation costs, no board of directors requirement, it provides business owners (called members) with limited liability protection, one level of taxation instead of two, etc. However, these benefits alone should not be the deciding factor to open a U.S. LLC versus and corporation (such as what is called a âC Corpâ), until the tax implications are considered, which include the landscape of the U.S. federal income tax laws that have changed significantly since 2017. Under the Trump administration, the Tax Cuts and Jobs Act of 2017 ("TCJA") was enacted, which primarily focused on U.S. international tax laws. Under the TCJA, as a US business owner, you may find that a U.S. C Corp has additional tax benefits that do not apply to a US LLC that is treated as a disregarded or pass-through entity.

Additionally, many foreign investors are unaware of the U.S. filing obligations of Form 5472, which is an Information Return required by a 25% foreign owner of a U.S. Corporation or a Foreign Corporation Engaged in a U.S. Trade or Business via a wholly-owned U.S. LLC that is treated as a disregarded entity. Investors often ask: Who is required to file Form 5472? How does a business determine the U.S. shareholder status? Who are the foreign investors? In general, a foreign investor is not:

A single-member LLC is a disregarded entity for U.S. federal income tax purposes under Treasury Regulation sections 301.7701-2 and 301.7701-3, which means that the entity is not treated as separate and distinct from its owner for U.S. federal income tax purposes, so it is as if the entity, at least for such tax purposes, does not exist. According to the Form 5472 instructions, for tax years beginning on or after January 1, 2017, and ending on or after December 13, 2017, a foreign-owned U.S. disregarded entity is treated as an entity separate from its owner and classified as a corporation for the limited purposes of the requirements under Section 6038A that apply to 25% foreign-owned domestic corporations. Therefore, since 2017, a foreign-owned U.S. disregarded entity may be required to file Form 5472 for each year during which the foreign-owned U.S. disregarded entity has "Reportable Transactionsâ, hereinafter defined, with any related party. In general, the Form 5472 instructions state that a âReportable Transactionâ is any type of transaction listed in Part IV (for example, sales, rents, etc.) for which monetary consideration was the sole consideration paid or received during the reporting corporation's tax year. The regulation also added a very tricky point that even tax practitioners often omit -- The instructions to Form 5472 state that Reportable Transactions of a reporting corporation that is a foreign-owned U.S. disregarded entity also include transactions paid or received in connection with the formation, dissolution, acquisition, and disposition of the entity, as well as contributions to and distributions from the entity. Upon the formation of a U.S. business, foreign investors will likely pay for the legal advice or initial set-up costs that may be treated as an initial contribution to the newly formed LLC. Thus, foreign investors may have filing obligations in the formation year, which is often omitted from the advice received. This most often comes as a huge surprise to foreign investors setting up their U.S.

operations, who face a substantial $25,000 tax penalty for their unintentional failure to file the Form 5472. Criminal penalties under sections 7203, 7206, and 7207 also may apply for failure to submit information or for filing false or fraudulent information.

We live in a worldwide tax reporting web. The U.S. and the OECD countries have put tremendous efforts into cracking down on global tax non-compliance issues to track offenders and mitigate tax evasion. Without engaging competent U.S. international tax professionals to provide proper tax planning advice, it's very easy to fall into an unforeseen tax trap. If you are experiencing this issue, you may want to consider changing the default entity classification of an LLC to be treated as a U.S. C Corp by making what is known in tax parlance as a âCheck-the-Boxâ (âCTBâ) election on Form 8832, which is a tax concept that could solve this problem potentially.

As is identified in the Chart below, TCJA added several new tax laws and new opportunities for tax planning purposes. Unlike U.S. disregarded or pass-through LLC entities, U.S. LLCs that make a CTB election to be treated as a US C Corporation may be eligible for a foreign-derived intangible income (âFDIIâ) deduction when the U.S. C Corporations sell goods and/or provides services to foreign customers. The deduction reduces the effective tax rate on certain income to 13.125% compared to the statutory corporate tax rate, which is a flat 21%. The FDII computation is complicated. Nevertheless, it may provide additional tax benefits, which complicates the decision-making process regarding the pros and cons of operating in the U.S. or a foreign country via a disregarded or pass-through U.S. LLC. 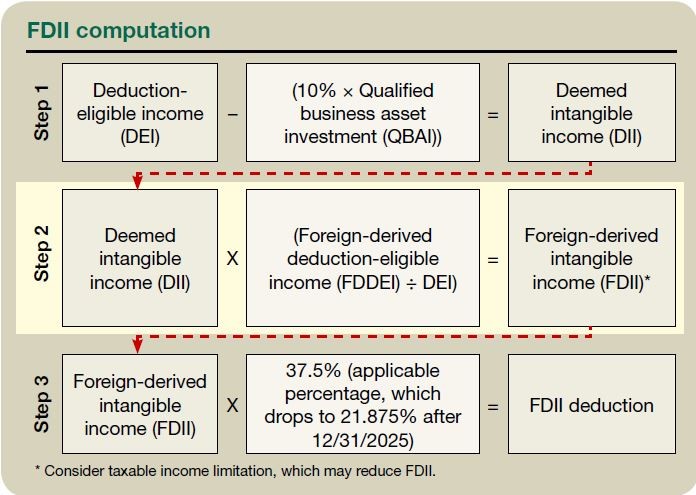 Note: The computation chart is from the Tax Adviser.com

In conclusion, it cannot be stressed enough that the choice of legal entity has significant tax complications for both U.S. and foreign investors, and it is undeniable that many global companies still benefit from having an LLC somewhere in their overall organizational structure. However, where the LLC fits in the overall structure must be carefully considered and certainly should not be viewed as the only answer when seeking to set up U.S. business operations. Although the U.S. tax laws have become increasingly more complicated, creating challenges, if properly advised, there are also ample tax planning opportunities. Therefore, it is most important when embarking on a business in the United States to choose a seasoned U.S. international tax professional who can help you navigate the complex U.S. tax regime, mitigate the many tax pitfalls that foreign investors face, and maximize tax efficiencies for your global operations.

M. Andy Wang is a Tax Principal at Zahn Law Group, LLP and Andesi Global Tax LLC, with which both firms are affiliated. Andy is an E.A. and received his Master of Science in Taxation degree from Fordham University. He has more than 15 years of international tax experience servicing various industries. Andy advises clients on a variety of international and domestic tax issues, including foreign tax credits, repatriation planning, income tax treaty planning, U.S. FATCA & withholding tax rules, and U.S. Subpart F income rules. He has spent extensive time providing global clients with solutions in dealing with matters related to the Tax Cuts and Jobs Act. Please contact him at [email protected] for comments or to suggest an idea for another article.