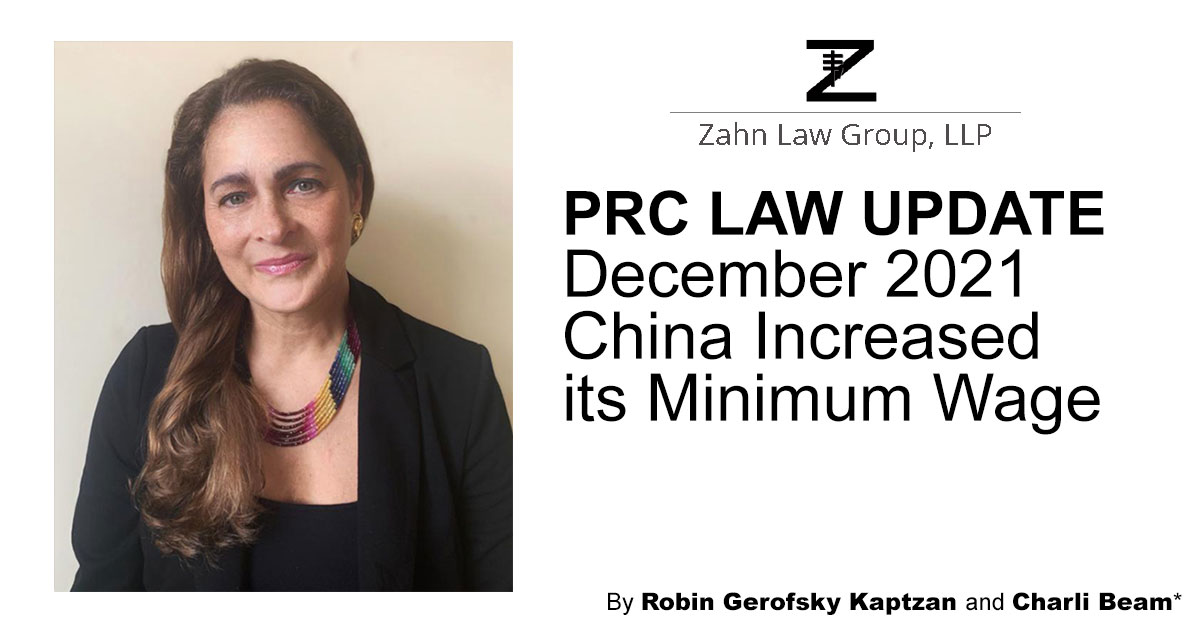 China continues to see an increase in the minimum wage requirements. In China, minimum wage refers to the lowest wage a company may pay its employees if the parties have entered into a valid employment contract, one that is in compliance with the PRC Labor Contract Law. An employeeâs wages do not typically include a certain type of expense called an âallowanceâ, overtime pay, or statutory welfare benefits. Rather, they only include âbase payâ. The recent change mainly affects individuals with labor-intensive factory jobs or low-end service jobs. As the increase is part of Chinaâs efforts to improve the well-being of its people and increase personal income, peopleâs livelihood and prosperity is expected to improve.

Why increase minimum wages now? Rather than having a set wage for the nation, China allows each province, city, or administrative unit to set its own minimum wage based on the local economic situation. While local governments can adjust wages based on local conditions, they are required to adjust the minimum wage every few years. The last round of adjustments occurred in 2017 and 2018. Most areas, excluding Fujian, Qinghai, and Guangxi, postponed an increase to the minimum wage standard in 2020 due to the COVID-19 pandemic.

Minimum Wage Classes - Consistent with the principles of economic and legal discretion, most provinces have different classes of minimum wage levels depending on the level of development and cost of living in a particular area. For example, developed cities will have a higher minimum wage class while rural areas and smaller cities have a lower class. While the minimum wage standard includes the social insurance premium and housing accumulation fund in some areas, other locations do not include them. For example, Beijing and Shanghai do not include social insurance premiums and housing funds in the standard and require the employer to pay separately.

Examples of some of the monthly minimum wage rates are:

As the economy recovers from the impact of the COVID-19 pandemic, multiple regions in China, such as above, have increased the minimum wage standard. Thus far, 13 provinces and the cities of Beijing and Tianjin raised their minimum wage requirements in 2021. Monthly minimum wage rates apply to full-time employees while hourly minimum wage applies to part-time employment.

Increased Sick Pay - In addition to an increase in the base salary, other recent updates to the Minimum Wage Law include an increase of sick pay during an employeeâs sick leave. As in many provinces in the PRC, the minimum sick leave salary is 80% of the minimum wage standard for employees (some locations might have higher requirements - e.g. Shanghai has a higher standard of sick leave salary than most other regions).

Halting Operations - If the employer halts production, Article 12 of the Interim Provisions on Wage Payments states âIf the company stops work or production and this is not caused by the employee, the employer shall pay the employeeâs wages in accordance with the standards stipulated in the labor contract during the first month after the close of business.â

Investors in a PRC entity should evaluate operations and efficiency when minimum wages increase as the overall labor costs for employers are directly affected. Simultaneously with a cost-analysis, a company doing business in China should consider the changes or potential changes that might affect infrastructure, transportation costs, productivity, and access to a large domestic market as changes in these costs could influence profitability. To remain competitive, employers may choose to increase wages for their workers to be competitive as companies paying low rates are challenged with attracting talent. While increasing the minimum wage is important to employees as the cost of living continues to rise and important to companies as the need for highly capable workers is essential, it obviously results in a higher production cost and must be balanced with the other regional issues that affect financial decisions. Since minimum wage standards differ from region to region, companies should consider the standard of each location as well as industry-specific wage levels, availability of talent, and access to incentives as part of the efficiency analysis of its existing business and a new one.

China Travel Restrictions for China Expected to be Relaxed for Americans in 2022: The American Chamber of Commerce and Chinaâs Foreign Ministry recently approved a fast-track program to address the current challenges for travel between the US and China for essential American company executives, technical personnel and their dependent family members to enter China. The program is being established in cooperation with the US-China Business Council and various local Foreign Affairâs Offices around China. Launching the program is expected in early 2022. http://www.globaltimes.cn/page/202112/1240963.shtm

Hong Kong Health Code System Registration has Started:- On December 10, Hong Kong has opened for registration the âHong Kong Health Codeâ system to facilitate quarantine-free travel between Hong Kong and its nearby regions, Macau and Guangdong. After providing certain information, the system allows applicants to upload travel details to enable them to receive priority for travel. https://www.info.gov.hk/gia/general/202112/09/P2021120900238.htm